to you and yours 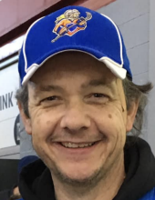 The Chicago Blackhawks Warriors’ October this year ended on a most tragic note. Our organization lost a very dear friend, fellow hockey player and supporter, Tom Zimmerman. On October 26th, Tom tragically took his own life, shocking everyone he knew or ever touched. This is an all too common occurrence in our veteran community.

Although Tom was not a veteran himself, his unwavering support for the veteran community and especially the Chicago Blackhawks Warriors will be greatly  missed. Tom’s FloBros Hockey sponsored numerous fundraisers for our team. Great, friendly games they were as you would come to expect from Tom and his teams. He also helped support our team with apparel sales through his website and sales at our fundraising events.

Anyone who met Tom got to know an individual who was always there to give to others. His smile and wit would light up the most difficult of moments. His love for the game of hockey showed by how many different teams he formed or played on.

Tom also coached numerous youth hockey teams. He will forever be remembered by his young players as a fun-loving coach that wanted to teach others the game he loved so much. The wins and losses didn’t matter. It was the fun that was important.

The Blackhawks Warriors will never forget Tom or who he was to our team and players.

We love you , Tom! You will be forever missed and never forgotten!  TZ 13 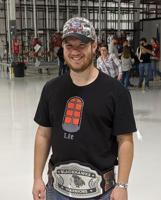 October 19th brought these two organizations together for their annual hockey game at Oak Lawn Ice rink followed by a fantastic night of raffles, dinner, drinks, music and dancing. This has become one of the largest fundraisers for the Warriors again their year.

The game was the typically hard-fought battle between two tough teams. Again, this year as in the past, Local 281 was stingy about giving up goals, but was able to dent our net for seven goals. The final score ended up 7-3 in a competitive, but friendly contest. The biggest highlight of the game was Ben Voss scoring the “first” Warrior goal for his career, earning him game MVP!

As usual, the afterparty stole the show. Numerous raffle prizes, silent auction items were donated by numerous individuals and local businesses. As in the past, all of the food costs were covered by one of the Local 281’s generous sponsors. Unlimited beverages and music lasted well into the night. The kids couldn’t get enough of the bounce house supplied. The annual bags tournament went on as usual.

The Blackhawks Warriors cannot thank the Local 281 Sprinkler Fitters enough for this annual event that brings us together with them and so many the generous donors that support our veterans. Without organizations and corporations like this, it would be near impossible for our team to continue the way we are able.

A special thank you goes out to William Hinks and Lance Martinez of Local 281 who out do themselves every year making this a bigger and better fundraiser to support the Blackhawks Warriors!

Rock Bottom Restaurant & Brewery in Bolingbrook kicks off their annual “Rocktoberfest” celebration on Thursday, September 19th at 6:00 PM. The keg tapping of their Rocktoberfest beer highlights the evening. As they have done in the past, 25 cents from every pint sale from September 19 – October 6th will be donated to the Chicago Blackhawks Warriors hockey organization.

Many members of the team will be present for the tapping, tasting, and a Meet & Greet starting at 6:00. In addition the Blackhawks Warriors will be raffling off items including t-shirts and Blackhawks preseason hockey tickets.

Come on out and bring your friends and families to enjoy some food and drink while supporting this great cause for some great veterans!

Some of the proceeds will be used to help fund our annual October trip to the USA Hockey Warrior Classic tournament sponsored by Terry Fator. This year we will be defending our B Division Championship against some pretty tough competition.

On Saturday, August 17th the Inaugural Puck Run motorcycle ride will take place to benefit the Chicago Blackhawks Warriors and Tribute to the Troops. This benefit is being generously sponsored by our partners, Illinois Harley Davidson of Countryside and Texas Roadhouse.

The ride will be a poker type ride with a hockey twist.

The ride begins at 10:30 am and ends at Illinois Harley Davidson, 9950 Joliet Road, Countryside.

The Block Party will start at 1:30 pm and will feature games, raffles, music, food, drinks and more. This is for the whole family whether you participate in the ride or not.

$15. per person for Block Party catered by Texas Roadhouse

The Blackhawks Warriors will be playing the Team Pareti group on Saturday, July 27, 2019 at the Twin Rinks Ice Arena in Buffalo Grove beginning at 2:15 p.m.
The Blackhawks Warriors Hockey team, sponsored in part by the Chicago Blackhawks, is comprised of our veteran soldiers who have been injured in combat. These injured veterans now have a chance to get back to regular life and sports play a big part in this process. We encourage everyone to support the Blackhawks Warriors by coming out to this day of games and events and cheering them on to victory or by contributing in some way so that these heroes may participate in the game we all love.
The Team Pareti group is comprised of a group adult hockey players and their families and friends who want to help raise funds for these veterans to be able to play the game of hockey we all love so much.
To make a donation please click here. Please remember to indicate in the memo section the Team Pareti or Blackhawks Warriors player you are donating on behalf of.

If you would like to help in some way as a volunteer the day of the event please send an e-mail to Mark Pareti at markpareti@gmail.com.

For the official flyer and complete bios of the Blackhawks Warriors players and coaches please see the attached documents below.

The Chicago Blackhawks Warriors ice hockey program was founded in 2015 in conjunction with USA Disabled Hockey to give our injured military members and veterans the opportunity to play hockey in an environment suited to their needs. The program trains them in the skills needed to use hockey as a rehabilitation tool to overcome physical and mental disabilities sustained in their service to our nation.

We are a nonprofit 501 C3 organization. We depend on fundraising and charitable donations to fund our players and team. In addition to ice time, out of town games and tournaments add travel costs, meals and lodging.

To offset these expenses, we seek donations from private individuals and corporate donors.

We also play fundraising games against other teams and organizations as away to raise money for our team. If your organization is interested in playing a fundraiser game, please contact any of our team representatives.